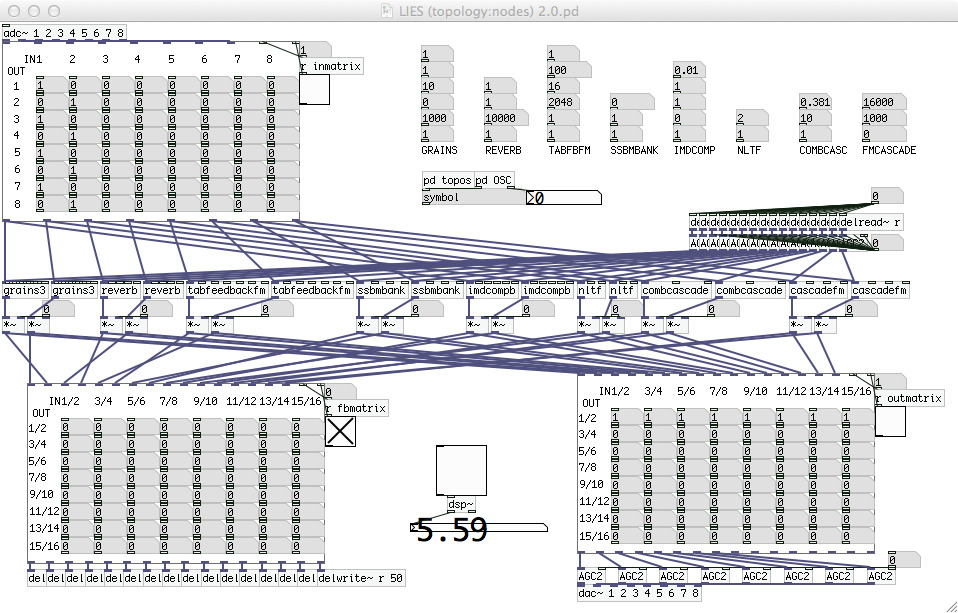 In the past years I have mostly used AudioMulch to implement my digital feedback systems. It’s a nice and well-written software, but it is not meant to give the users the possibility to operate in the low-level. That resulted in a strong limitation that slowly pushed me towards low-level softwares. Pure Data was one of the softwares used by Agostino Di Scipio for his classes, and I started using it to implement my projects for the exams, some of which became ongoing musical projects as in the case of LIES (distance/incidence).

AudioMulch was instead used for my past project LIES (topologies/nodes) 1.0, a performance where I interact with a digital feedback system by changing the variables of the processes in the network and its topology through a MIDI controller.

During the past few months, I’ve been implementing a set of new and original sound processing units in PD - also based on feedback and recursion - which I have now put together in what might be the 2.0 version of my LIES (topology/nodes) project. Some of the processes involved in the new system are asynchronous granular processing where the position and speed factor of readers and pointers are dependant on the sound output, cyclic buffer FM where the modulation depth is related to the output, nonlinear distortion where the output affects the transfer function which in turn affects the output, articulated beats phenomena with bank of frequency shifters in feedback configurations, a “high-speed” compressor which results in interesting dynamical sounds because of inter-modulation artefacts and feedback, and some others. Of course the implementation of a limiter was also necessary to avoid endless amplifications, as well as that of a feedback matrix in order to be able to explore all of the possible topologies in the network. Another major improvement is that here I’m using OSC to change the variables of the system, something which gives me much higher resolution and that is fundamental in nonlinear systems.

Future projects related to these last developments will probably be new systems where I apply systemic criteria for new mapping strategies between interfaces and system’s variables. More about this soon.